The Battle of Northampton

King Henry knights ten of his men including Thomas Stanley and the five year old grandson of the Duke of Buckingham.Both would be heavily involved in the demise of Richard III, twenty four and twenty five years later

The Yorkists send Heralds and Bishops to the Lancastrian camp to negotiate, still maintaining they do not want to fight, only talk with the King. A Yorkist Bishop changes sides and urges the King not to negotiate but fight.Buckingham declares “The Earl of Warwick shall not come to the King’s presence and if he comes he shall die.”

Warwick finally replies “At 2 o’clock I will speak with the King or I will die”. It would be the last time that any negotiations would precede an English battle. Coppini, the Papal Legate pronounced the most terrifying of all excommunications – an anathema on their enemies, exhibiting before the camp an Apostolic letter in which was believed to contain the formula for the excommunication forbiding them to have a christian burial. Warwick orders either spare the commoners or spare Grey’s men (depending on the source).

‘le seigneur de Greriffin’, who along with thirteen to fourteen hundred men, was outside the fortifications. He goes on to say that the Yorkists skirmished with Greriffin outside the town for an hour and a half. It is not clear whether the report means the whole Yorkist army or just part, but it is more likely that it was the Yorkist vanguard led by Scrope and Stafford when they first arrived. These Yorkists then assaulted the town itself which took another half hour from when Greriffin’s men retreated. They entered Northampton by force, pillaging and burning the town as they passed through it

The Yorkists then advance on the Lancastrian position, it would be the only time a fortified camp was assaulted during all thirty-seven years of the wars. Several accounts say that the Lancastrian guns fail to fire. Although the guns might not have worked, they were not defenseless and shower the Yorkists with up to 100,000 arrows. Despite this William Lucy in Dallington hears gunfire and races to join the King (was this then Yorkist gunfire?)

When Edward Earl of March (later King Edward IV) and his men reach the defences, Lord Grey of Ruthin in the Lancastrian left flank and his men start helping the Yorkists into the camp.

Its all over for the Lancastrian’s. A fight takes place around the King’s tent in which Buckingham, Egremont, Beaumont and Shrewsbury are all killed. So too is Vaux from Northampton. The King is captured by the Yorkists.

Many Lancastrians try to flee. With the bridge under Yorkist control and the river under flood plus a myriad of smaller waterways that flow east and west between the Abbey and the town, they can only go east and lots of miniature battles take place across the landscape. Many are recorded as dying as they try to cross the river (probably Rushmills).

William Lucy arrives on the battlefield only to be met by his wife’s Yorkist lover, who kills him with an axe. The two marry shortly after.

Between 5-7,000 killed. All the Lancastrian lords are killed. King Henry is captured. He stays at Northampton for three days and takes mass at Delapre. He is then led back to London in procession. Soon after Richard of York returns and for the first time lays claim to the throne. Margaret of Anjou escapes with the Royal baggage but is overtaken at Gayton. The rogue bishop is arrested and thrown into the dungeon at Warwick Castle.

Want to know more? please buy our book “The Battle of Northampton 1460” published by NBS and available from either their stand at events, Northampton Museum, Bosworth Battlefield Visitor Centre or Amazon. 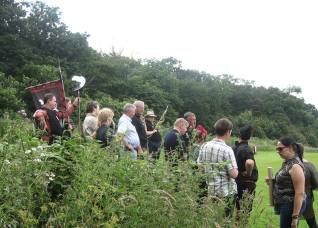 battlefield tour led by the chairman 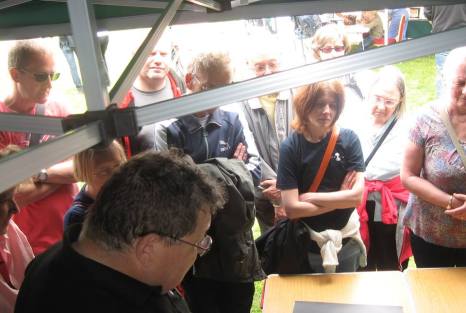 We are pleased to announce the publication of our new book on the 1460 Battle of Northampton. Written by medieval historian Mike Ingram and illustrated by Matthew Ryan. Forward by Earl Charles Spencer.

It should have been the battle that ended Richard of York’s rebellions. With the Yorkists politically destroyed and the estates confiscated, all that remained was to carry out the punishment for treason – death. On 10 July 1460 King Henry VI and his army waited for the Yorkists in a heavily fortified camp in fields outside Northampton. However, they did not count on the treachery of Lord Grey of Ruthin. For the first time, this is the full story of the Battle of Northampton which took place during the turbulent period now known as the Wars of the Roses. It was the first and only time that a fortified camp was assaulted and was the last time protracted negotiations took place before a battle. In its immediate aftermath the House of York laid claim to the throne of England for the first time and so began the bloodiest phase of the Wars of the Roses – the war of succession. As well as the battle itself, the book looks at Northamptonshire’s medieval history and its involvement in the Wars of the Roses.

Northampton today is, frankly, an under-appreciated, often overlooked, town. The joke is, people only know of Northamptonshire because they shoot through it on the M1: they note the name of the county town on notice boards from exits 15 to 16. But this was, once, one of the great centres of power and influence in early and Medieval England. It was also, with Oxford, home to one of the first two universities in the land. Mike Ingram brings fine scholastic research to play, in reminding people of Northampton’s past importance – strategic and social. His energetic prose gives colour to every page, while his revelations intrigue and entertain. He helps us appreciate why one of the great battles of English history took place in this Midland town, and he skilfully resurrects the generals and ordinary soldiers who clashed in an engagement that helped lay the foundations of this nation’s past. You don’t need to be a champion or resident of Northampton to appreciate this overdue appraisal of the battle that bears its name. This is a book that everyone who loves History – particularly the almost forgotten kind – will savour.

The new issue of Medieval Warfare Magazine, a Wars of the Roses special, features an article on the 1460 Battle of Northampton by our chair, Mike Ingram. The article includes maps of how the action took place, plus a cover article on Francesco Coppini. On the cover is Warwick, Coppini and the future Edward IV beside Queen Eleanor’s Cross, from where the Archbishop of Canterbury and Coppini watched the battle.