Fawsley Hall lay at the heart of the connection of Puritan nobles and gentlemen from the Oxford-Northampton-Warwick border area who were leading opponents of Charles I’s religious and financial policies. John Pym took refuge at Fawsley Hall in 1637. A meeting of the Providence Island Company held at Preston Copes (adjoining Fawsley, and also owned by Richard Knightley), saw the formulation of concerted tactics to challenge the legality of the king’s levy of ship-money. There were present among others, Lord Saye and Sele. Lord Brooke, Richard Knightley, Sir Arthur Haselrig and John Pym.

Northampton became a nursery of “Independency” or Congregationalism (the religion of Oliver Cromwell). Archbishop Laud remarked, “In no other county In England was there probably the same extreme defiance of rubrics, order and doctrine, as was the case of some of the parishes in Northants”.

August: The King decided to send three troops of horse – about 300 men – under the command of Sir John Byron (the poet’s ancestor), from Nottingham to the Royalist centre of Oxford. Byron’s men carried a large sum of money and other valuables which were intended for the launch of the Royalist effort in the south. Byron’s route took him through Brackley, where he arrived on the evening of 28th August.  As supper was prepared, Byron was attacked by a force of some five hundred locals wielding pikes, bills and pitchforks – the numbers are large enough to suggest a planned ambush.  Byron and about half his men made their escape towards Oxford. The others were caught unprepared and routed. The booty was enormous. Northampton was also attacked from Queen Eleanor’s Cross by a party of Royalists in August 1642, but two pieces of ordnance drove them off with the loss of twenty men.

14 September: Earl of Essex reviews the Parliamentarian army which had assembled at Northampton. It was 15,000 – 20,000 strong. By 22 October, the Royalist army was quartered in the villages around Edgcote, and was threatening the Parliamentarian post at Banbury. The garrison of Banbury sent messengers pleading for help to the Parliamentarian garrison at Warwick Castle. The first major battle of the Civil War followed just over the county border at Edgehill on 23 October 1642.

December: – The trouble began when, on the 26th, Zouche Tate of Delapré Abbey sent a party of dragoons from Northampton  to arrest Francis Gray, a prominent royalist in Wellingborough, and a clerk of the peace. The parliamentarian press reported that a shot was fired, and ‘the town being full of malignants took distaste thereat, and betook themselves to their arms’. Bells were rung, ‘which brought in the country, who beset the town around’, and attacked the dragoons as they left. Before they could get back to Northampton, the dragoons were attacked again, this time by a force numbering over 500. Unable to secure Gray’s release, the country people then plundered ‘puritans’ in the nearby village of Wilby. The following day, more dragoons were sent to suppress the rising. The troops were again attacked by the inhabitants, some armed only with knives, bodkins and shears. The insurgents were finally defeated, and Wellingborough was plundered by the parliamentarian troops.  They did however, bring back a considerable number of prisoners including a lame Rev Thomas Jones.

19 March: Rockingham seized for Parliament by Lord Grey of Groby

6 May: The governor of Banbury garrison – James Compton, 3rd Earl of Northampton, received information that 700 Parliamentarian infantry with 300 cavalry were at Culworth, who were preparing to attack Banbury. The Earl sent a detachment commanded by a Captain Trist to face them and keep them in action, whilst he advanced with approximately 5-600  cavalry. He found the enemy in close formation in the ‘Town Field’ of Middleton Cheney (near to the present day Moors Drive) where they made a stand – firing their brass cannon and volleys of musket shot in a co-ordinated movement.

The Earl then charged them from the front, with Captain Trist on his left wing and Sergeant Major Daniel on his right and routed them. In order to avoid former mistakes by too rashly pursuing the fugitive cavalry, the Earl immediately followed up by charging their infantry – completely defeating them. Three hundred prisoners, killed over a hundred and wounded most of the rest, took the cannon, all the ammunition, as many arms gathered up as four carts could bring.

The same month there was a large skirmish at Wooton. 500 cavalry under Lord Grey with foot and cavalry from Northampton clashed with 1,000 horse and foot under Earl of Northampton. 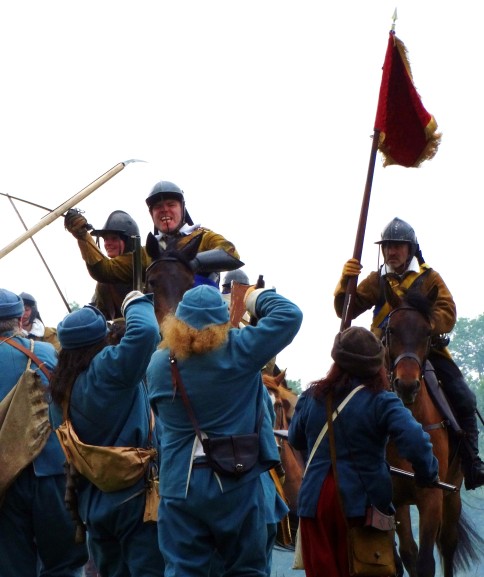 June: A Royalist raiding party of over 300 men from Belvoir Castle led by Colonel Murray enters Northants. After having taken 700 or 800 cattle they are intercepted near Rushton by 136 Parliamentarians from Rockingham Castle under Captain Wollaston.  In the skirmish that follows Murray, a Sergeant Major and a number of Captains are captured. The remainder are chased all the way to Stamford.

2 July: Parliamentarian horse out of Northampton under Captain Samuel, attack the Rev William Losse in his church at Lois Weedon, capture him, but he escapes back into church and takes refuge in the bell-tower. Wounded, taken for dead, he is left there. The soldiers rode up and down the church ‘spurring and twitching their horses purposely to endanger the people.’

14 October: Prince Rupert with 2000 horse and 700 foot launch a raid towards Northampton via Long Buckby. Parliamentarian cavalry are sent out to meet them at Kingsthorpe.   Advance guards clash at Brampton Bridge (near the modern Windhover pub).  The main Parliamentarian force retires into the town, chased by Rupert’s cavalry. It is a moonlight night. The gates are opened to let the cavalry in, musketeers lining the walls fire on their pursuers. Exchanges of fire until cannon are brought to bear. The Royalists move off through Kingsthorpe Hollow and Moulton Park to Billing Bridge and into Bedfordshire.

November: Prince Rupert, based at Easton Neston, sent out a proclamation to all the local villages demanding labourers with shovels to fortify Towcester based around Bury Mount where two guns are placed. The forces were increased by a further 14 regiments from Oxford. Towcester was mainly cavalry whereas Northampton was mainly infantry. 300 horse scoured the countryside in all directions for provisions and disrupted the provisions being taken to Northampton. Greater number of horse kept back and 7 pieces of ordnance. Value of pillaging and forced contributions reckoned at £1000 daily. Constant skirmishes took place between the two sides. On one occasion, a party of the Newport horse, headed by Colonel Harvey, surprised Towcester in the night, slew the sentinels, killed about 30 men, took 2 colours, and 20 prisoners, whom they brought to Newport Pagnell, without the loss of a single man, and only two slightly wounded. 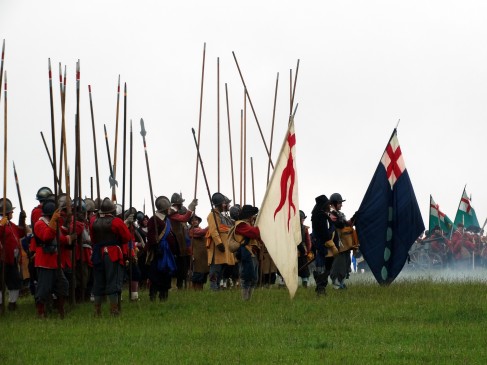 2 November: Skirmishes at Alderton and Stowe Nine Churches. 15 men were killed, 22 were taken prisoners and the Royalist horses were taken. “a horse fayre was kept at Newport that day, and horses sold cheape for ready money”

Prince Rupert, having made Towcester very strong by constructing water filled ditches and using the remains of the Roman walls, moved to Oxford but left a strong force at Towcester.

20 December: Northampton forces then attacked quarters at Duncote killed 20 and returned with 30 prisoners. Skippon, advanced from Newport to Grafton Regis with two troops of horse and 400 foot joining with Colonel Whitam from Northampton with 1400 horse and foot.

December: Siege of Grafton Manor – . The siege seemed to have lasted about a week and the house finally surrendered on Christmas Day 1643.

18 April: Some 50 foot from Northampton occupy Dryden’s house at Canon’s Ashby in order to gather money and supplies from locality. The Earl of Northampton’s horse and some 200 foot from Banbury attack, driving them into the church and up the steeple from which they are ejected by threat of burning. Whetham offers to exchange prisoners, but this was rejected.

26 April: A party of horse ride through the night to rescue the 32 prisoners taken at Canon’s Ashby from a barn next to the walls of Banbury Castle the next day and defeat a Royalist counter-attack, taking 32 men prisoner and returning to Northampton.

29th June:  Battle of Cropredy Bridge takes place on both sides of the county border. 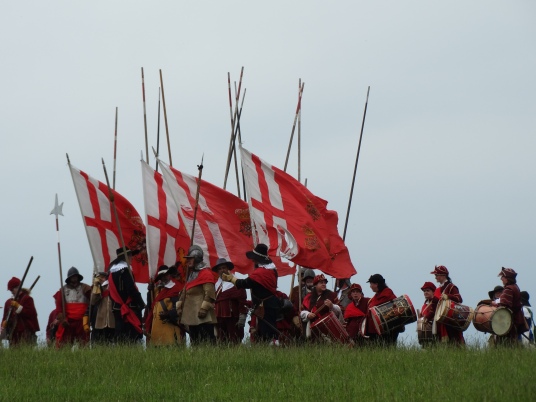 November: Kilsby ransacked for provisions by Northampton’s men from Banbury and 24 men taken away. The women of Kilsby march on Banbury and demand their men, their 200 cattle and 80 horses back. They agree to pay the arrears of ‘contribution’, £300, and forfeit the horses but get the rest.

The first “self-denying ordinance” was put before Parliament on 9 December 1644 by Zouch Tate of Delapre Abbey. It provided that “no member of either house shall have or execute any office or command…”, etc. in the armed forces. It was the beginning of the New Model Army.

‘Taxing’ continues as far as Brackley and Harlestone

8 June: convoy of supplies leaves for Oxford. Parliament claims with 30,000 sheep and 8,000 cattle

12 June: HQ moved to Kislingbury. Horse quartered in Rothersthorpe and Harpole, 2,000 horse in the meadows. 3,000 foot at Collingtree and Hackleton

19 January 1646, part of the Ashby garrison marched through Leicestershire into Northamptonshire and captured Castle Ashby, taking the governor home with them. 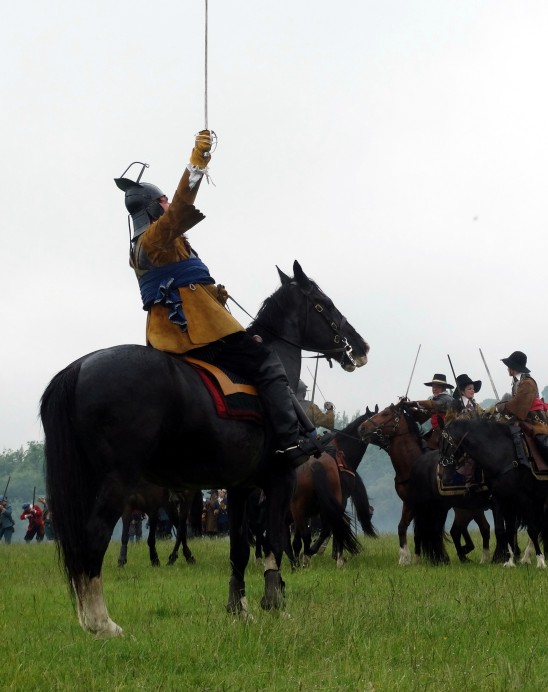 6 June 1648: Woodgate House near Etton, was the home of Dr. Michael Hudson, Chaplain to the King. It was besieged by Parliamentarian forces led by regicide Colonel Thomas Waite. Promised ‘safe passage’, the defenders eventually surrendered only to find the promise broken, the Parliamentarians resumed their assault once they were let into the Castle. Hudson was chased up onto the battlements and forced over the edge, where he clung desperately by his fingertips, until his attackers chopped off his fingers and sent him plummeting into the moat. Still alive, he attempted to scramble out, but was struck by several musket butts.

May 1649 – The Banbury Mutiny. 400 troopers under the command of Captain William Thompson who were sympathetic to the Levellers set off from Banbury, where they were billeted, to speak with other regiments at Salisbury about their political demands. Major White was sent by Cromwell and Thomas Fairfax to mediate with Thompson’s troops and give assurances that force would not be used against them. However, on 13 May Cromwell launched a night attack at Burford. Several mutineers were killed in the skirmish. Captain Thompson escaped only to be killed a few days later in another skirmish at Walgrave.

In April 1660 General John Lambert tried to raise an army against the restoration of The Crown in favour of the Commonwealth by issuing a proclamation calling on all supporters of the “Good Old Cause” to rally on the battlefield of Edgehill, Easter Day 1660. With Lambert was colonels John Okey and David Axtell and four troops of horse under Capt. Robert Haselrig, Capt. Timothy Clare, Mjr John Netthorpe, and Col. Matthew Alured

General George Monck, sent troops led by the regicide Colonel Richard Ingoldsby who hoped to win a pardon after Lambert. The Earl of Essex made a hundred horse available and the Northamptonshire Trained Bands were put on alert. En route, Captain Elsemore captured Capt. Robert Haselrig, who, it appears was trying to get to his father. Captain Haselrig was freed on parole on condition that his troop changed sides.

The next morning, 22 April, Easter Sunday, Ingoldsby and his men came across Lambert, Okey, and Axtell as well as Lt. Col Arthur Young and their small army in a field two miles from Daventry presumably on the Banbury Road. Streater ordered six files of musketeers to advance. When in range, the first file fired wounding several of the horse. They continued there advance but were ordered not to fire again until they came to push of pike. Mjr Nelthorpe’s troop joined Haselrig’s and changed sides. The rest very quickly surrendered. Axtel and Okey managed to escape. Despite begging to be allowed to go free, Lambert, was personally taken prisoner by Ingoldsby after his Arab charger became bogged down in a muddy field. Cobbett, Young, and the other captains were also captured. 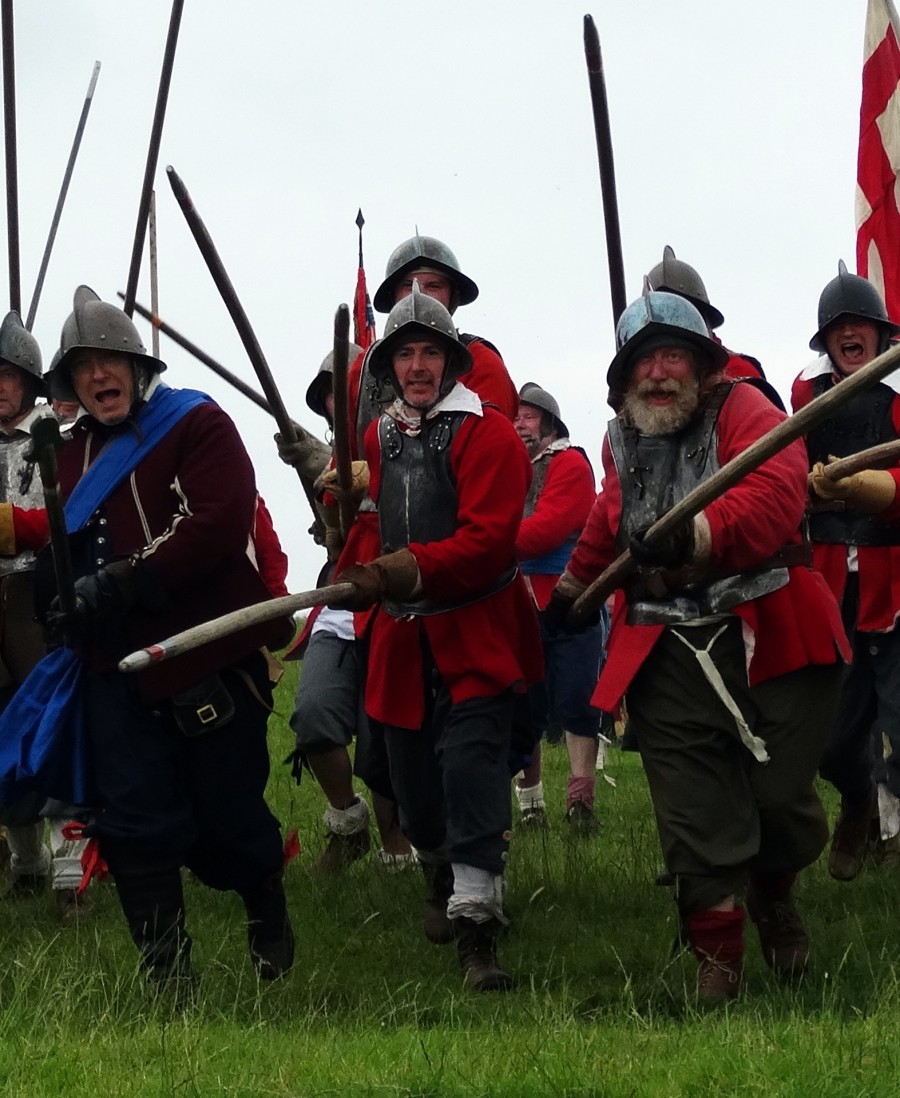